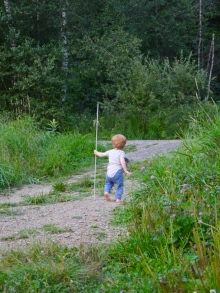 September.  We are well enough into it now, though the burst of heat that wrangled itself around our limbs in the month’s first week felt more like summer than most of July.  Much has happened in the last few weeks, as much is always happening on a farm in late summer, but it’s enough to say that vegetables have been harvested, new seedlings planted, and cover crops cast; it’s enough to say the sun has risen and set and we’ve sweat in between.

Of all the things I’ve witnessed this summer, nothing has lifted me as the sight of my toddler stamping through the woods to a particular tree and announcing, “Ash! Ash!”  Maple was the first tree he learned to say, birch was the second, and for a few weeks our walks transformed from quiet strolls to three miles of excited shouts and screeches as Waylon pointed out every birch and maple we passed.  At toddler height, he is learning to identify trees by their bark, and as I didn’t learn the difference between ash and maple bark until my husband began sugaring five years ago, Waylon’s declaration of the long ridged trunk as an ash tree had me smiling in wonder.

Edge pointed out the scales of spruce bark as Waylon repeated sprue, and he touched little knobs along the otherwise smooth gray beech, saying bee.  How long did it take me to learn the names of trees?  How long did I live before I could look through a forest and know at a glance the species that live there?

“Waylon is the smartest two-year-old I’ve ever met,” I said aloud, though if every toddler spent as much time around trees, they’d surely know their names, too.  The beauty of toddlers is that they are so open, so willing to learn, so willing to connect with their surroundings.

To be open. To be willing.  With these lessons, I learn over and over again the excitement of discovery.