And suddenly it’s green.  It happens all at once, and every year I forget the immediacy of unfurling leaves and popping green until that moment when I look up and see the sunlight catch the color anew. 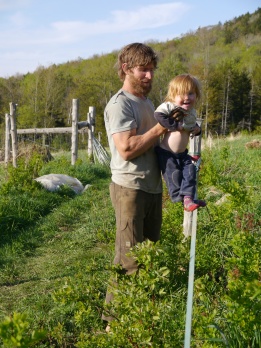 The farm is unfurling into May, too.  10,000 onions, 700 feet of salad greens, 600 feet of spinach, 400 feet of tomato plants and snap peas, plus kale, cabbage, kohlrabi, carrots, beets.  We are in with our whole hearts and bodies now.

This little boy of mine is in it, too, learning to slack line with his Papa, learning to walk in the pathways instead of on the garden beds, and learning to be gentle with transplants.  When he tried grabbing the tomatoes, I said, “Be gentle with the plants.  Give them love,” to which he responded by bending down, softly brushing the leaves and saying “looaahhh”

Now even the grass gets loves from Waylon.

The birds, too, command his attention.  Crows, ravens, carrier hawks, red-winged blackbirds, robins, even a heron landed in a tree to scout our pond the other day, and Waylon announced it all, saying “toot toot toot” to show us the birds.

And now he is pointing out the window, saying “side, side” and so it’s time to close the computer screen and go out with him into the day.

After daily poetry postings for April, I’m turning now to my farming season schedule, and will be posting once a week.  Look for a new post every Friday (with occasional extras scattered through the week). 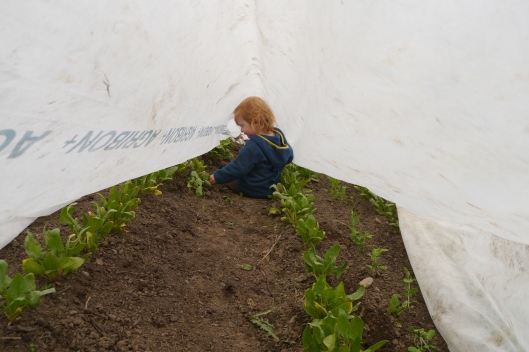 Waylon in the remay-tent, harvesting spinach 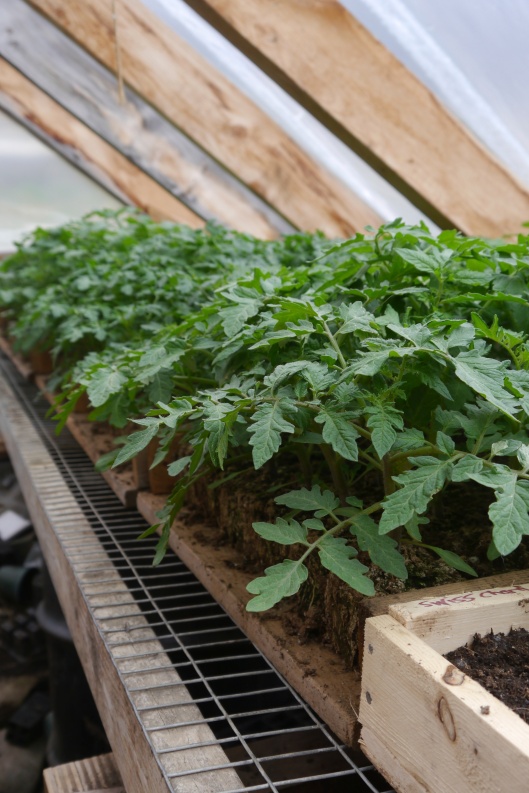 The first chance of snow is forecasted for Sunday.  It’s due to come with a mix of rain, and so it’s doubtful anything will stick for long, but the winter is whistling in, and we still have preparations to make.

Today we’ll harvest the last of the parsley and make one more round of pesto.  My goals is 15 more 8-ounce containers worth.  (Yes, we have nearly 40 already, enough for the CSA, but we need some of that green to get our own family through the winter, too).  Our late season pesto is more creative than the classic basil.  It’s base is parsley, plus the last of the basil in the greenhouse, and perhaps some cilantro, too, and then, for a little twist we add kale, giving the pesto a deep green color.

Of course, there is still firewood to chop and stack, and a hole under the sink that needs to be fixed, but right now my mind is first on food preservation, pulling what can still be pulled from the field and transforming it into pesto, or sauerkraut, or a salt-vegetable preserve we use as a soup starter.  The bulk of preservation is already complete, but as nearby farmer said to me the other day, “This time of year people get serious about eating.”

It’s true.  I feel an urge to squirrel away all that I can for the coming cold months, and suddenly everything is precious.  Winter has a way of putting things in perspective, and though there is a flurry of action to get ready for it, there is something grounding about all these preparations–food preservation, chopping and stacking wood, tightening up the yurt, cleaning up the farm fields and tucking in the remaining crops with remay and plastic.  All of this work grounds me to the ancient rhythm of seasonal transition; it brings me to the base of life’s work, which beyond staying warm and sheltered, is feeding oneself.

So today: harvest the parsley and kale.  Chop and stack more wood.  And of course, explore outside and read books with Waylon.  After all, we need to teach our little ones the transition of seasons, too.

What are your winter preparations?

The full moon illuminated the snow, which had compressed in the recent cold snap when the moisture dissipated, leaving dry frozen hard pack that crunched like styrofoam as I walked to the barn for evening chores.  I fed out hay to the cows, then cleaned and bedded their space in the tie stall, scraping away manure and replacing it with fresh sawdust.

“Goodnight, Cows.  I love you,” I said, as I always do, then flipped off the light and walked out of the dark barn into the bright night.

Hunger Moon.  That is what old farmers called February’s full moon, which lights the middle of winter as some of the coldest temperatures of the year set in.  I imagine what it must have been like long ago, when winters consistently lasted for six months, from November to the beginning of April, with March going out like a lion with snowstorms.  I imagine going into the root cellar in February, taking stock of potatoes, carrots, beets, parsnips, turnips, and cabbage, and counting the canned goods that had been prepared the previous fall, making sure the supply would last until spring.  Some families still put food by for the winter, though with grocery stores and coops, the threat of hunger is not so dire.

The winters are less predictable these days.  Even since my youth, the season has changed dramatically.  I remember preparing for Halloween, making sure our costumes were warm enough to trick-or-treat in the snow, though I don’t remember the last time flurries flew about with make-believe ghosts and witches.  The common saying here still goes that you should have half your woodpile left by February 1st, but woodstoves were hardly used this past November when blue skies and 60 degree temperatures muddled the seasonal lines between summer and fall.

But now it is February, and the air dips to single digits at night, and the Hunger Moon still lights the northern sky.

Last night Edge pulled spinach, maple sausage, and tomato sauce from the freezer.  Until then we had forgotten about the greens I’d blanched in August, and after weeks of beans and roots, spinach was a cause for celebration.  Edge made a medley of spinach, sausage, pesto, eggs and rice, and the taste of summer burst through the green flavors.  This morning I made a spinach, sausage and egg scramble, put the tomato sauce on to simmer for tonight’s dinner, and thought how winter meals demand more imagination than variety of ingredients—how many ways can you cook root vegetables and prepare cuts of meat?  The Hunger Moon may not give us fresh cucumbers and ripe tomatoes like the Harvest Moon does, but it is full nonetheless, and despite the repetition of ingredients, we are full as well.

On Tuesday night, after chores, I sat in a pool of moonlight pouring through the yurt’s glass dome, and a quiet awe grew within me as the calm strength of the Hunger Moon filled the world with shades of blue.  In that light I met a creativity that is born out of stillness, a fullness that arises out of emptiness, and realized that all winter asks is that we come alive just the same.

Welcome to The Good Heart Life: an organic gardening and lifestyle blog where we grow beauty, joy, and nourishment for the body, soul, and earth. I'm Kate Spring: organic farmer, mother, and chief inspiration officer at Good Heart Farmstead and The Good Heart Life. Grow along with us, and together we'll cultivate a more lively, joyful world one {organic} seed at a time.